For over thirty years, from 1971, Father Raymond Murray and Fr Denis Faul produced approximately 150 books, leaflets, pamphlets and other material highlighting the abuse by the British state of emergency laws in the North of Ireland; harassment and intimidation of civilians; injuries and deaths caused by rubber and plastic bullets; collusion between British security forces, British intelligence and loyalists paramilitaries; unjust killings and murders by the security forces; excessive punishments and degrading strip searching in prison; the political, legal and medical systems that upheld these injustices; and the media that failed to investigate and report on them – abuses ignored by all but a handful of individuals and civil rights organisations.

In addition to the written word, both priests travelled widely to publicise these abuses and to bring pressure to bear on the British Government. They were among the first to state the innocence of the Birmingham Six and Guildford Four and the Maguire Seven. Needless to say, these activities provoked the anger of the British Government and the Unionists, as well as the Irish Government which actively tried to blacken Father Murray’s reputation. Their continued condemnation of violence from all sides also provoked the anger of both loyalists and Republican paramilitaries.

Every item in the collection can be read by pressing library button.

Fr Murray records in his biographical page how he collected the material and how they were photostatted and stapled in local businesses. They were largely distributed only in the Nationalist areas most affected by the Troubles although both priests ensured that religious and political leaders in Ireland, UK, USA, the EU and other countries were sent copies. Bookshops did not stock them and they became an Irish version of samizdat. Until now, only a small percentage of the material is available on the internet, so this site provides the first opportunity for everyone to access all the publications by Fr Murray and Fr Faul. The publications are collected in 9 bookcases.

Books and Pamphlets has 35 items and includes all the major works such as:

The Hooded Men on the 14 men selected for in-depth interrogation over a prolonged period of time after they were taken from their homes on the morning of internment in August 1971. This ill-treatment was part of the case, submitted by the Irish Government against the UK government, to the European Court of Human Rights.

Other books on this subject include British Army and Special Brach RUC Brutalities and The Mailed Fist. Sectarian Killings and collusion are covered in The Triangle of Death and Collusion 1900-1994. H Blocks and Hunger Strikes reflect a momentous time in recent history and provide an alternative view to the British propaganda. The Birmingham Framework was one of the first to cast severe doubt on the conviction of the Birmingham Six. Rubber and Plastic Bullets Kill and Maim catalogues the deaths of children by RUC and British Army forces. Other books record investigations into individual killings Majella O’Hare, Angela Darcy, Michael McCartan, A British Army Murder.

Mercier Press bookcase has the three major works by Fr Raymond Murray. Hard Time Armagh Gaol 1971-1986; State Violence; The SAS in Ireland enlarged and updated edition. These can be read in full.

The publications in the British Army bookcase document the terror tactics of various regiments in Belfast, South Armagh and elsewhere, and various killings.

The ill-treatment of prisoners in Long Kesh and other prisons, the beating of women in Armagh Gaol features in the prison bookcase. Other publications tell the story of the H-Blocks, the background to the “dirty protest” and the attempts to prevent hunger strikes and prisoners dying.

The repression of the Catholic minority in the North is dealt with in a number of pamphlets in the Catholic Community bookcase. These include the attacks on Catholic church property, discrimination in Short Brothers, and the general alienation of Catholic.

Legal rights leaflets over a number of years are displayed in the Law bookcase and other items document reflect the discrimination against Catholics in the judicial system.

Press Releases refer to various publications in the other bookcases.

The Miscellaneous bookcase gathers another dozen items that are in the archives but are not numbered in the list of publications in State Violence. Some of these should be and it is unclear whether the priests were involved in the others ones. 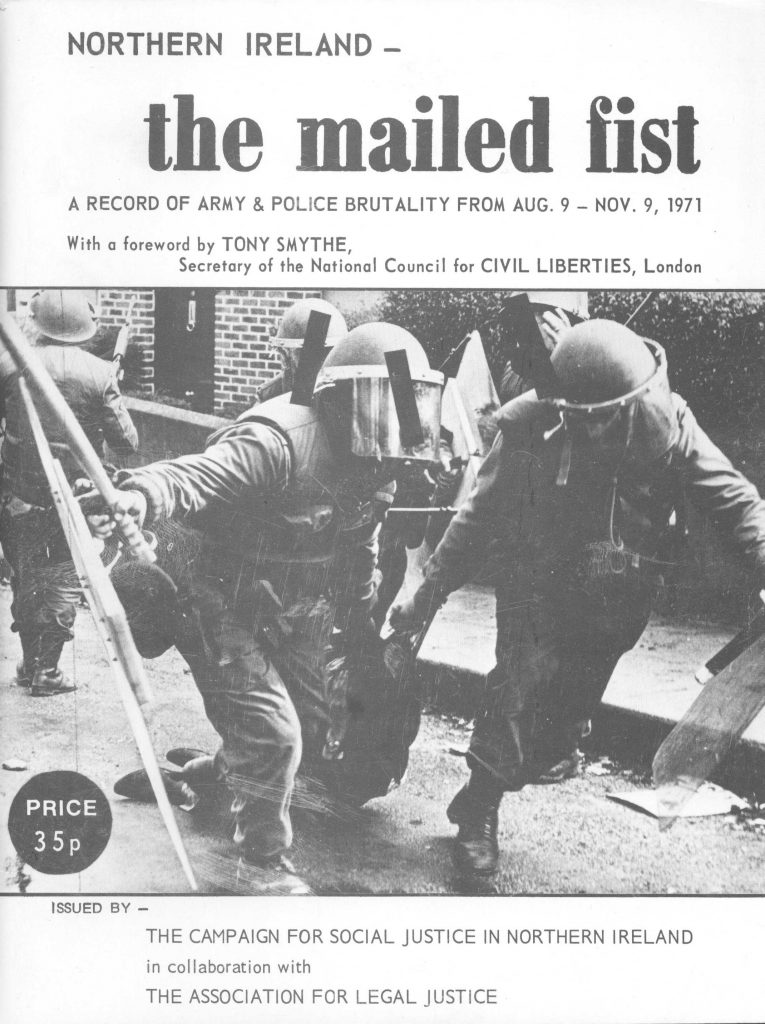 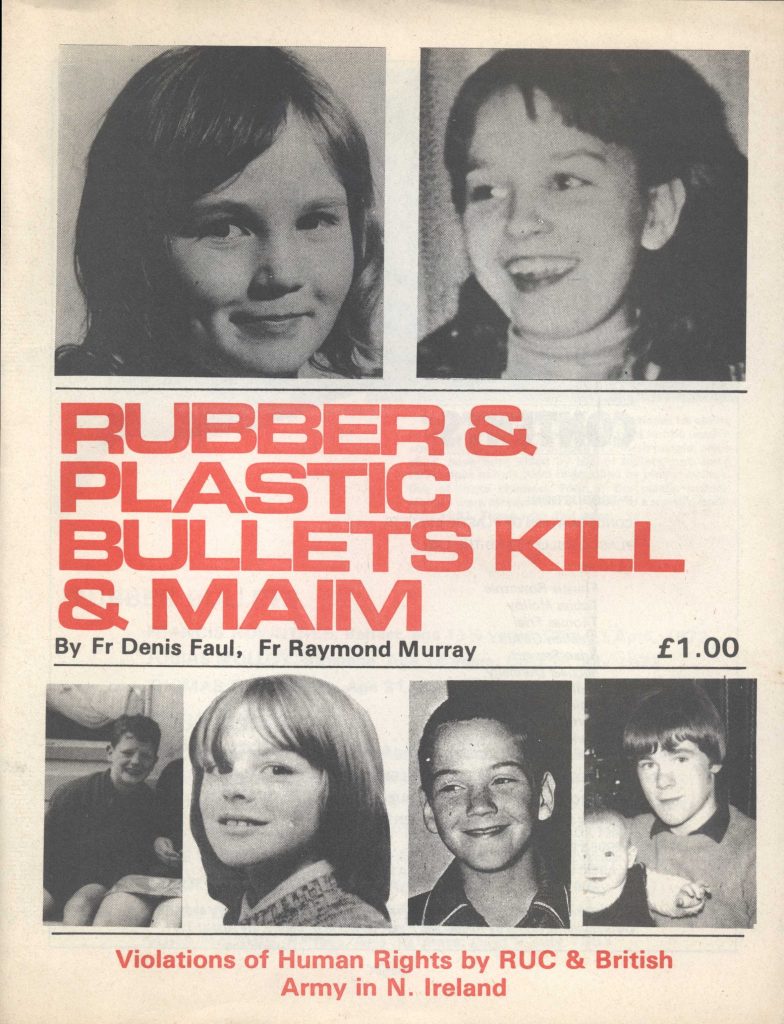 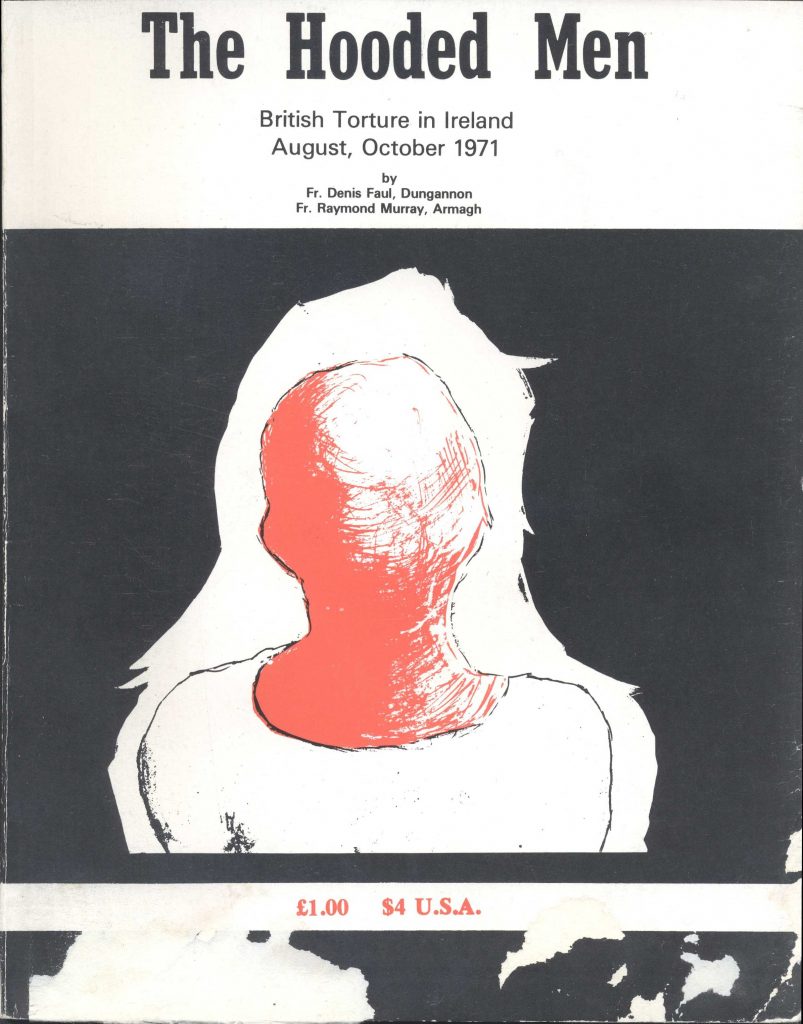 Theme by WPExplorer Powered by WordPress